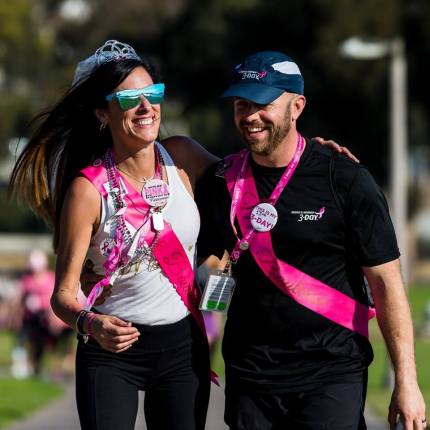 It only took 3 days and 60 miles for Dylan and Karla to feel the spark. 365 days later, they took that journey again, this time as husband and wife. Though they had both been involved for the 3-Day in years past, Dylan and Karla didn’t officially meet until friends introduced them on the 2017 San Diego 3-Day. Dylan started walking for his ex-wife’s good friend in 2002 and has now participated in 13 events. 2016 was Karla’s first year walking. But 2017 was the one that counted, because that’s when they met each other. That’s where their story began…

How did you then meet each other?

Dylan had walked in the Philly event in 2016 and again in 2017 along with other good 3-Day friends. When the 2017 San Diego 3-Day came around we were introduced by common friends at the Red Marlin Day 0 party. Our friends had no idea what would happen in the days to come.

That depends who you ask. 😉 Dylan would say the first day wasn’t like any other walk. Karla might say she had her eye on Dylan, but the first day was fairly normal. The second day we walked together more, talked more and started to realize there was a spark. By Day 3, it was pretty clear we had a strong connection. Plans were altered and the Monday following the 3-Day we spent all day wandering around San Diego. For the sake of brevity, many details are being left out, but it goes without saying (now) that we couldn’t deny the connection.

And how has your 3-Day experience changed over time?

We continue to meet amazing people who have become dear to our hearts and unfortunately a few of these dear friends have lost their lives, which gives us more reason to continue this effort. Together we are more determined to raise money and participate. As far as the actual walk goes, it’s changed considerably given we basically walk all 60 miles holding hands.

This year was your first walk as a married couple!

Dylan proposed to Karla a month after the 2017 3-Day (right before Christmas). She moved to Raleigh from Atlanta two months after that. We both decided pretty quickly we wanted to get married in San Diego right before the 2018 3-Day but the details kind of fell into place over the next few months. On a drive from Orange County to San Diego in January 2018 we passed Oceanside, the city Dylan’s dad grew up in. We visited the house his dad grew up in and, subsequently, drove a few miles south to Carlsbad where Dylan’s grandfather had established a church in the early ‘60s after retiring from the Navy as a Chaplain. The visit wasn’t intended for scoping out a wedding venue, but we both decided after walking the church campus that there was no better place to profess our love for each other and to bring both families together. As more plans came together, we decided the Red Marlin (where we had originally met) was an obvious location for the reception and of course that meant our guests would be staying at the Hyatt Mission Bay. It was not only our wedding host hotel, but also the 3-Day host hotel! It was pretty cool seeing our wedding family transition to our 3-Day family.

And what was it like walking only a few days later?

It made for a LONG week. We got to San Diego the Sunday before the 3-Day and didn’t get back home to Raleigh until the day after Thanksgiving. We both had a blast walking in the 3-Day for our honeymoon. 😊 We also spent a couple of days at the Hotel Del Coronado following the Closing Ceremony.

You were also featured in the camp show this year for the Newlywed Game!

It went by so fast we barely remember! Dylan does remember being right on more of the questions than Karla. LOL

What are some lessons you’ve learned on the 3-Day that also apply to your relationship?

Sometimes in the real world it’s good to have the 3-Day family as an example of giving and philanthropy to look back on for reference. We both have lifelong friends we’ve met at the 3-Day and get to see throughout the year.

One who will hold your hand and listen to your rambling.

And partner in life?

Not much different! We are each other’s priority and nothing else is more important. It helps that we basically think the same way.

What are your Valentine’s Day plans?

Well, Karla’s birthday is 2 days after Valentine’s Day so it’s kind of a combined thing. We honestly don’t put much emphasis on Valentine’s Day. We don’t need a holiday to remind us to love each other. That said, for Karla’s birthday she wanted to go to the Daytona 500 so we’re going to Florida that weekend and watching fast cars turn left for a few hours. I’m sure we’ll be holding hands the entire time 😊 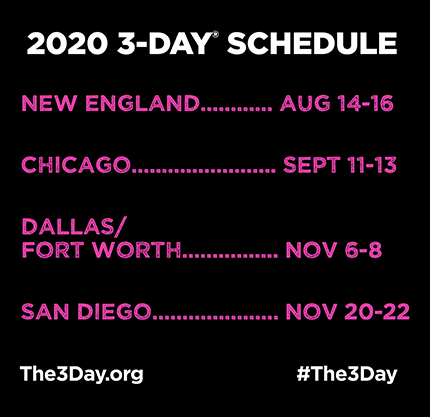 Welcome to the 3-Day Blog!

This is a place to share the inspiring and extraordinary stories of the 3-Day community. It’s a place to highlight the exceptional people who claim the title 3-Day walker or crew. It’s a place to call out some of the best wisdom, tips, and just-plain-great messages that we hear from you.

New to the 3-Day Blog? Our Insider's Guide to the 3-Day is a great place to start! This series of posts will fill you in on what to expect on the 3-Day - from the route, to camp, and everything in between!

Please note that this site looks best in IE9+, Firefox, or Chrome.

Learn more about the 3-Day at The3Day.org or by connecting with us on social media.